Petr Bařinka has continually developed very authentic intuition that is being materialized and examined in his artwork. His serigraphy series Strašáci (2007) carried the seed of what we can see in the Endland cycle. I wrote about Strašáci that it was a containment of the horrible things out there in the human mind. It was a first step towards a reversed view, where the dreamy elements tangle with real figures. In Bařinka’s work it is not just about the subjective statement. It is more like a moving synecdoche, in which the work touches a general human experience through a partial voicing of the author. It is an unveiling of an anthropological constant of an “inner experience” - a sovereign shutting of eyes, a transgressive averted glance. This gesture was precisely described by a French philosopher Georges Bataille: “If a man actually didn’t close his eyes, he in the end wouldn’t see what is worth seeing.” In this reversed view we can see “the sun that shakes and a big eyelid that shuts the world out” (Foucault)

In the present new artifacts of Petr Bařinka the eye looks inside. It is a view stuck in the eye or even “an eye open inward in the skull, a white globe shut around night, (...) the black core of the eye spills in the world like a water spring, that sees, i.e. lightens; it could also be said that it concentrates all it changes it into a clear night of image. It is a mirror and a lamp; it spills light around itself and in the movement, that is not even opposed, it casts this light into its wells.” (Foucault). A world imprisoned behind the eyelid is not processed by the consciousness and suppressed by the wakefulness. It turns to “the nightly and starry insides of a skull so when it shows its blind and white backside, it is then that it realizes the most important thing inside: it shuts the daylight out in a movement that shows its own whiteness (but that is the picture of brightness, its reflection on surface, and that is why it cannot be in contact and cannot communicate this whiteness); round power of pupil sends it to the main darkness, which it lights with its glow, and displays it as night.” (Foucault) A cave of bones, the world of night opens where the awake world ends. There where the world of day ends, the Endland begins. 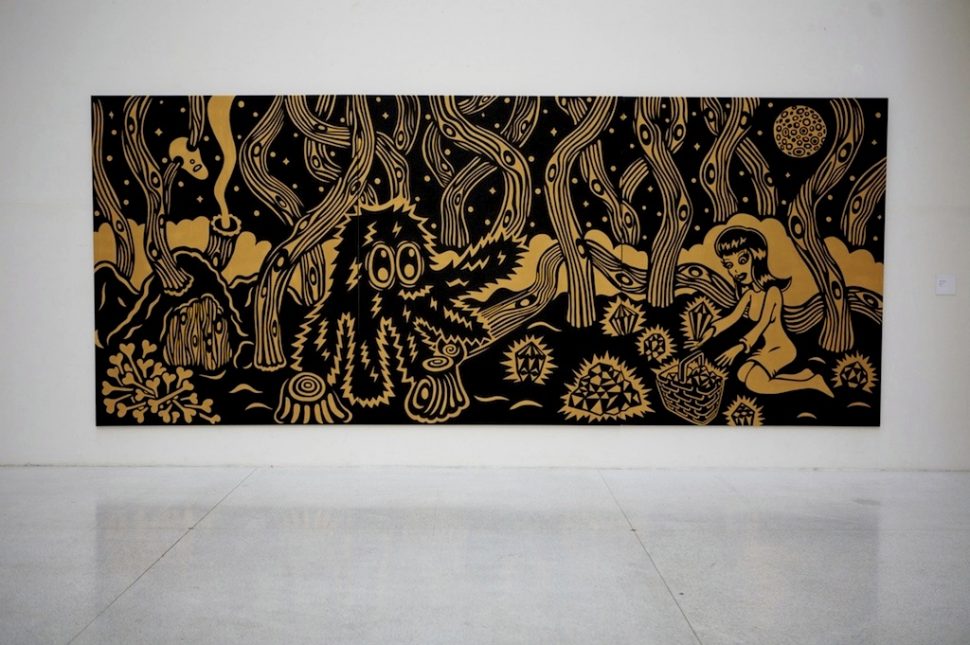 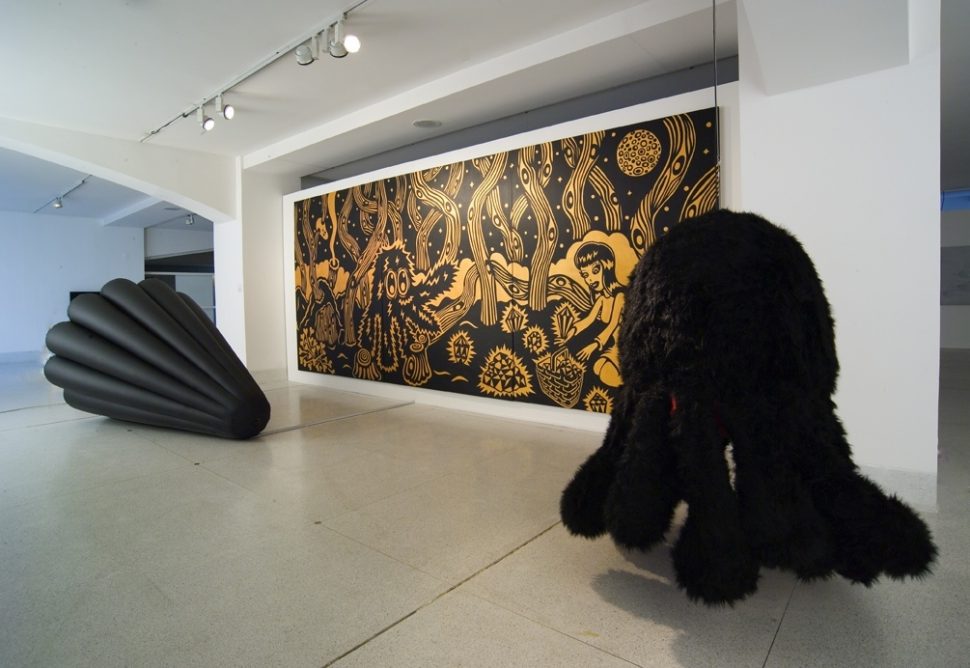 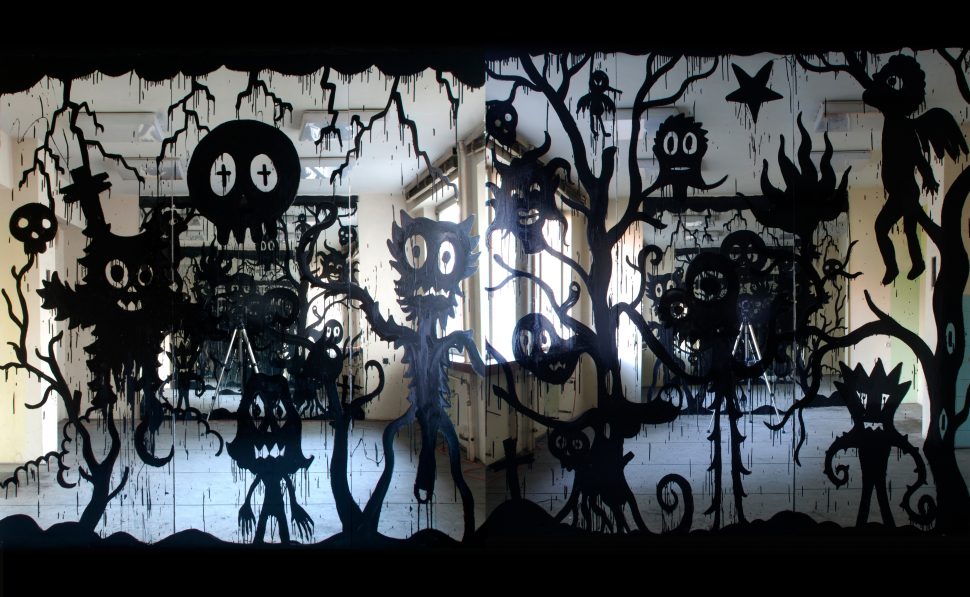 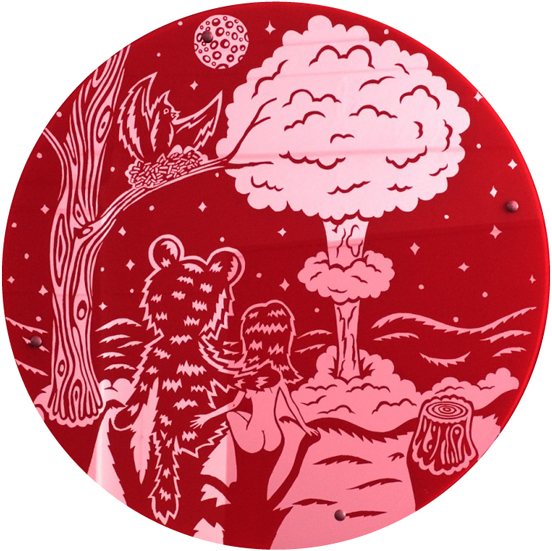 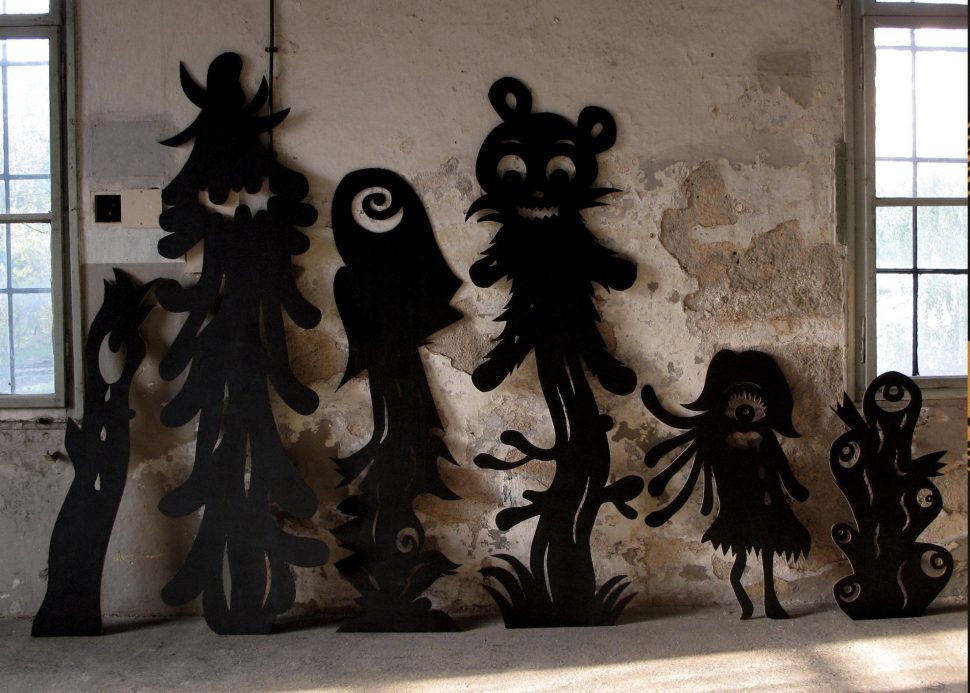 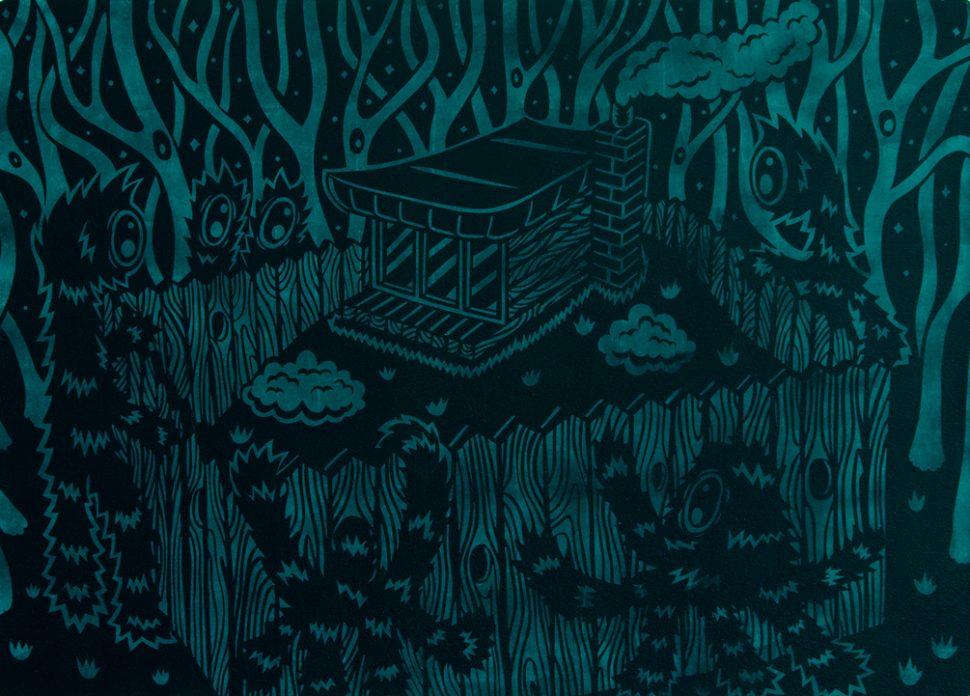 Here we have a testimony of a look onto imprints of outer things in inner space. A materialized dream is shown, nightly imagination and dreaming, negative of the outside world, and let’s say once again: the private and unique author’s statement leads the spectator towards a generally anthropological aspect of viewing, that takes place behind closed eyelids. Because “...behind the eye that sees, the eye is much more subtle, discreet and also so lively that the almighty glance eats through the white ball of its own body; behind it there is a new one and past that another one, ever more delicate, and their substance is nothing but the clear transparency of a glance” (Foucault). And it is the energy of a look, which is the substance of exhibited works. The attending figures are always looking. Their job is to watch, observe. We look at figures that themselves are watching. A motive called rückenfigur appears - figure turned back towards the observer while watching the scene in the background with us. Our own look watches the image, but maybe it is us who are watched, watched in our sleep, because when we sleep “the others” walk around our houses - figures of our unpredictable watchers. It is a strange world, where people are second in a foreign world , where people are watched during sleep.

This materialized look inside is brought onto the borderline with the outside world. However, it is not an echo of the outer world, it is a completely different world with its own rules. Every image tells a part of the story and the transition between them is just a dreamy cut. The unsaid is as important as the voiced. However Bařinka does not do a psychoanalysis on the basis of the psychological figurativeness, but rather - poetry, picture, atmosphere of a materialized dream. It evokes a state of hypnosis, a dream of a haunted house. It is a narration, a fairy tale about the pilgrimage to the world behind the mirror, to the world ruled by the dark Leviathan. The pictures give off a cinematic experience. A nuclear blast happening on the movie screen of a summer cinema which casts light upon a romantic scene of a girl with a teddy bear. The scene contains everything: love, conception and conclusion - black sun of night.

In spite of the discussed topic referring to death and the possibility of an end, it is served in a pleasantly naive style which avoids pathos. As if it was about the night of a lost child, the space of dreaming, the earth they sleepwalk in their dreams. There death is innocent and erotic. The evoked possibility of an end amplifies the knowledge of a boundary: “It is possible, that the experience of transgression in this exact movement that leads into the arms of night, shows the relationship between end and existence, that moment of boundary”, towards which the anthropological thinking shyly moves (Foucault). To sum up let’s say that in Bařinka’s work the inside is brought to the edge of the outside. But it is not the hackneyed metaphysics which current authors often bore us with. It is an art of transgression created after the death of God. Like Freud saw sexuality in Sade’s speech, even though it could not voice it, every speech can be no more than an introduction to a picture. Critical talk eventually has to fade away on its own, it has to yield to the piece of art, take a break as soon as it finds its own limit. I too will now stop at the imaginary border across which Endland begins. Ladies and gentlemen, welcome to Endland!