MODUS OPERANDI should have been a co-production of two artists – Petr Bařinka and Pavel Strnad. The preparations were disrupted by the tragic incident. One of the artists – Pavel Strnad – suddenly terminated his life (1977 – 2012). Therefore the previous concept transformed into Bařinka‘s site specific installation using of the drawings from the left estate of his suddenly deceased friend. The installation became an expression of grief and memorialization. Bařinka covered one whole room in dark painting that shows us the other side of the world. There is an upside down world, the world of turned over ships, cars and busses, aircrafts. Based on the form this painting could be put into the world of art that is sometimes titled „doomsday art“ and may remind us of Gondry’s „disastrology“ in the Science of Sleep. The dooms day, the last judgement or the apocalypse refers not only to the topic, but rather to a specific dynamics of shapes. We can find it for example in the „Last judgement“ by Hieronymus Bosch, in the „Triumph of death“ by Peter Breugel and more recently in the artwork by the Chapman brothers or Douglas Gordon. Everytime we can find the grotesque reversal of expected forms. Carneval mutation of the sensuous and sub- stance reminds of the fragility of the human world. It produces eeriness and laughter at the same time. It also feels like Petr Bařinka has chosen a playful game for his MODUS OPERANDI that enables him to process even the most tragic situations in our lives. In the contrast to the monumental and nevertheless pious black and grey painting excelled the tiny drawings by Pavel Strnad inserted into the space of the painting and in this way there was a dialogue created that sadly is not possible to lead anymore. 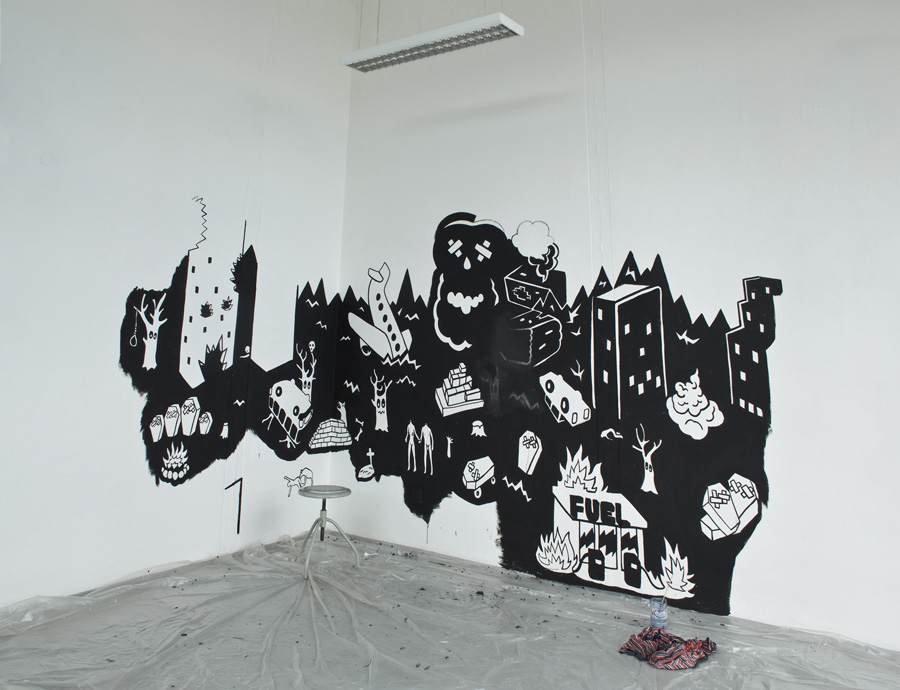 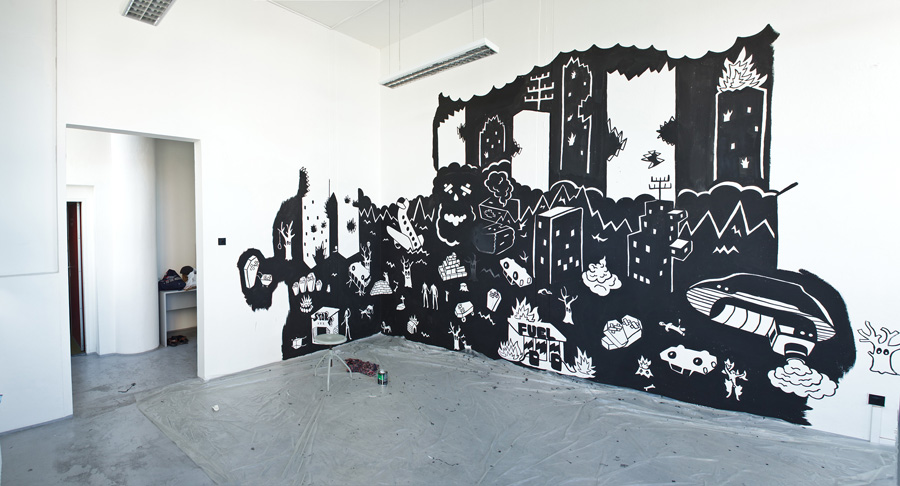 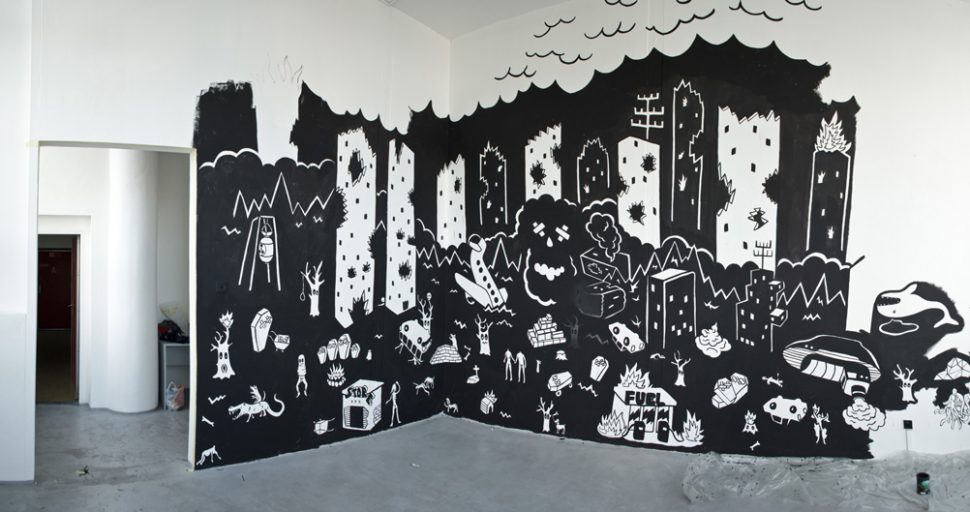 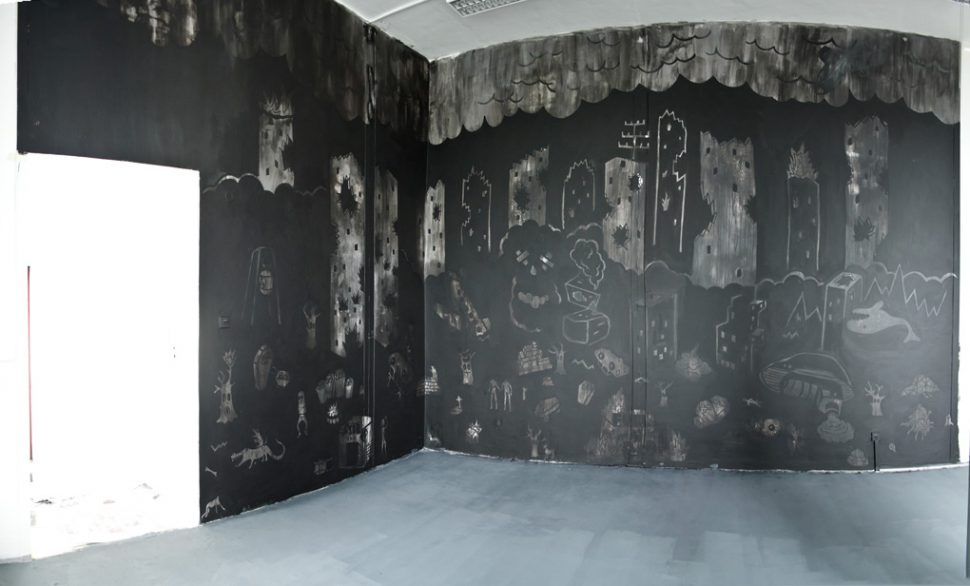 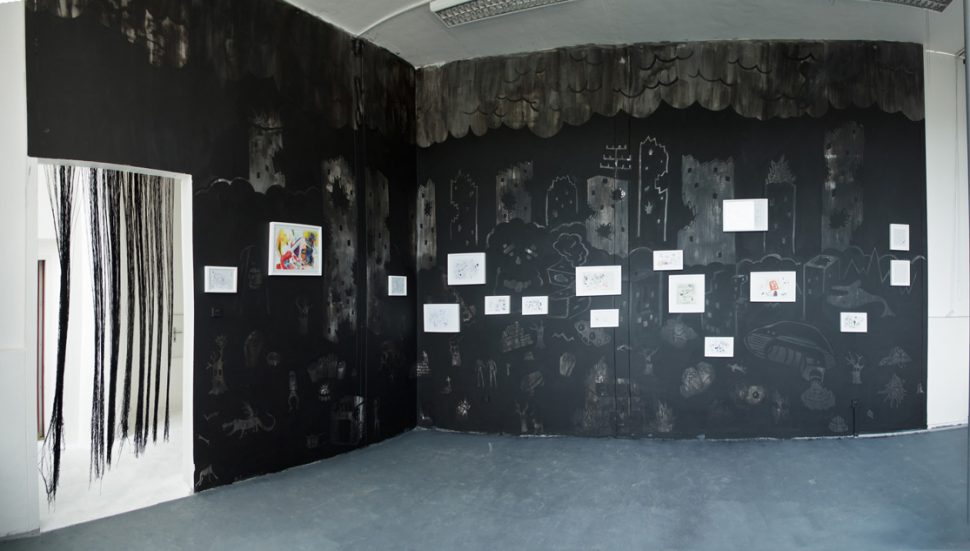 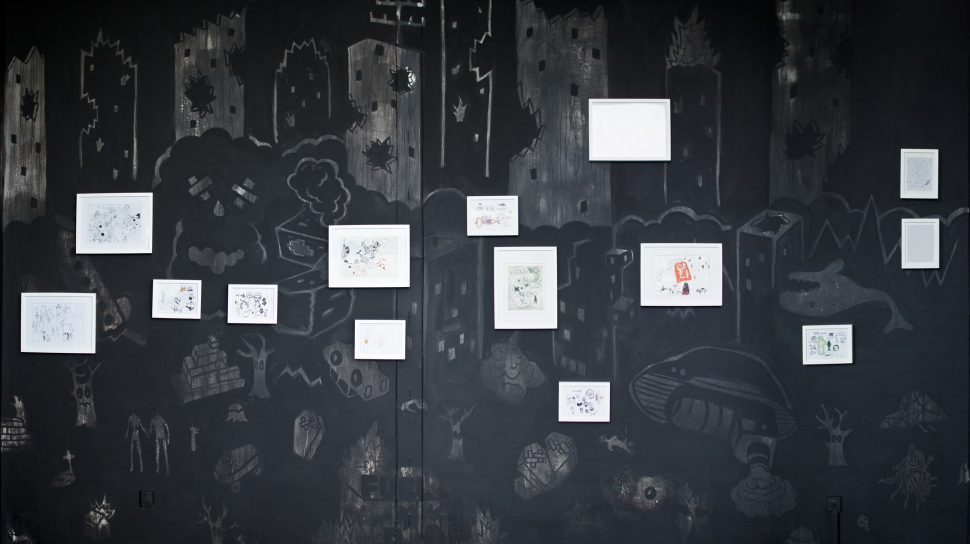 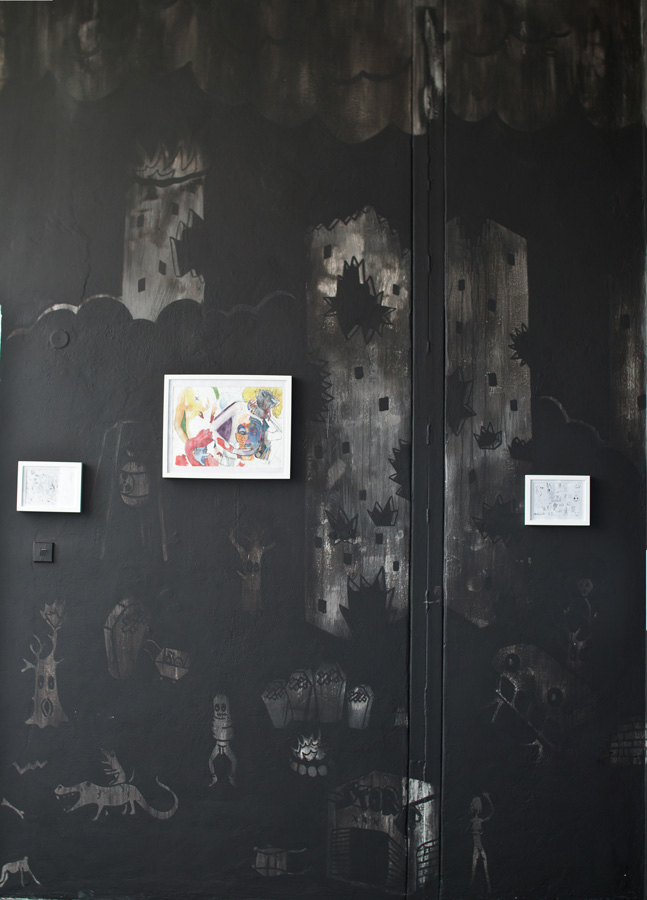 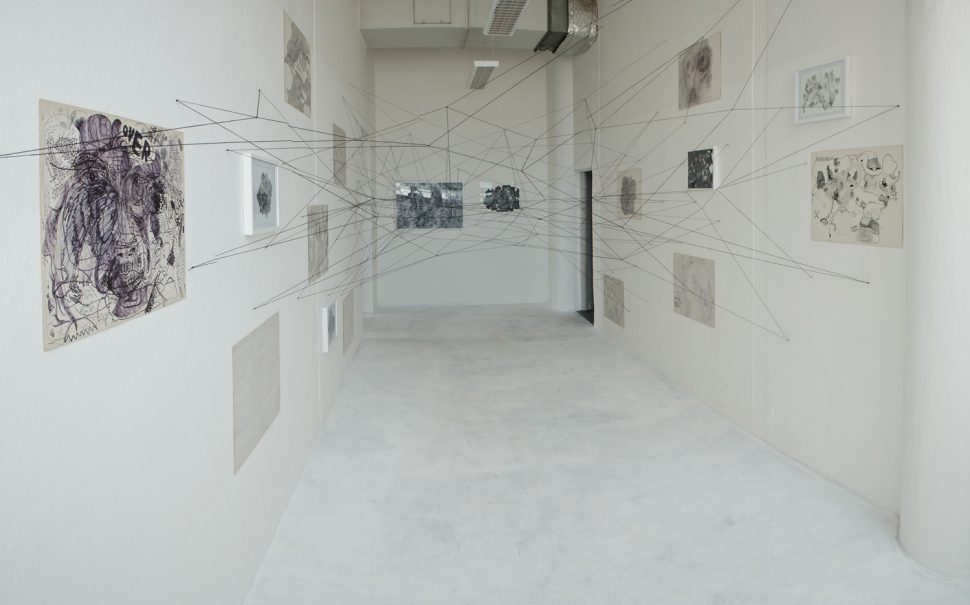 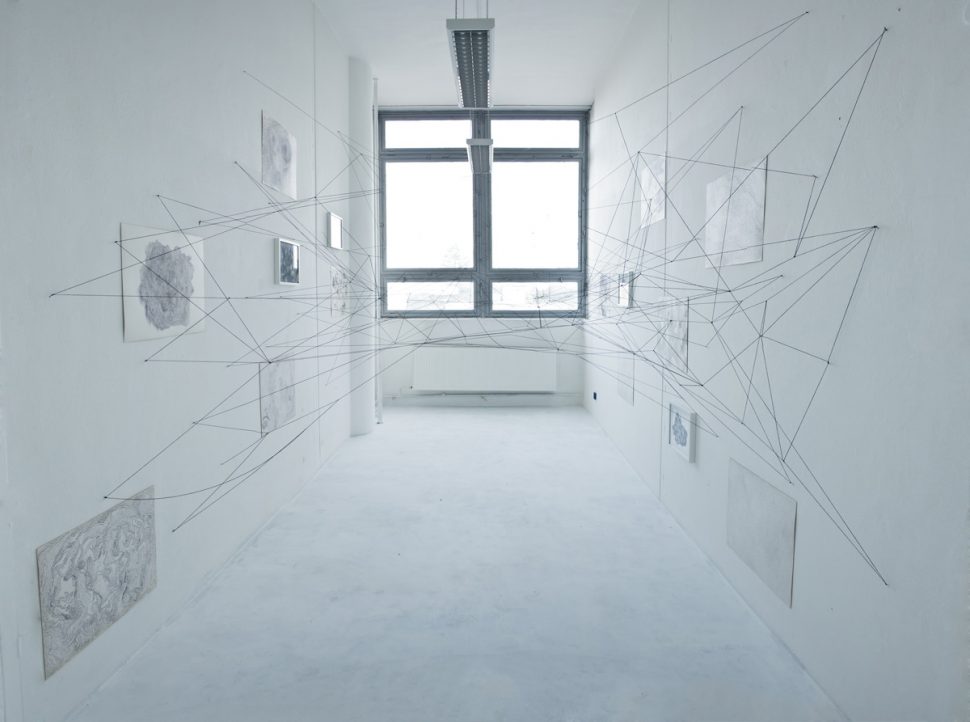 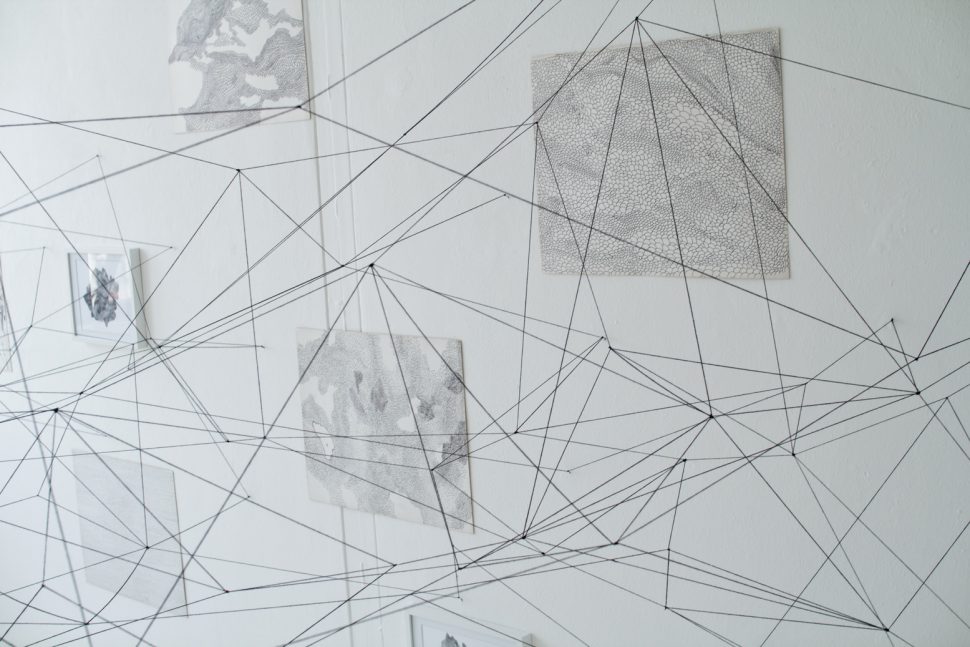 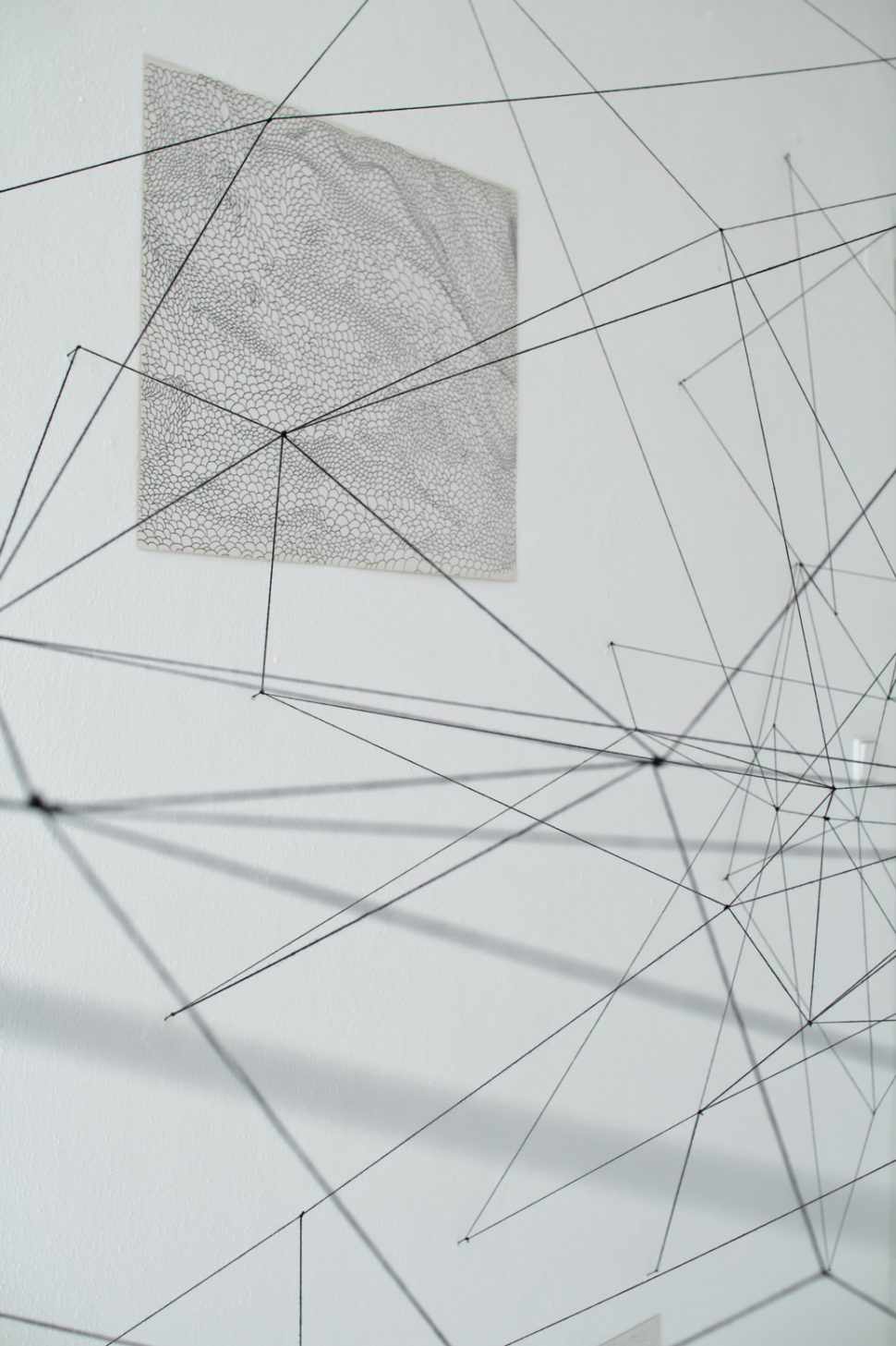 The second room of the gallery was on the contrary white and there were installed Strnad ́s black paintings. Bařinka thread these paintings with the irregular black horizontal cobweb, a crystallic landscape or rizoma. The percipient had to find his or her way through the thread to look at the drawings more closely. Strnad more significantly moved from the world of dreamlike and fantasy figures towards their mutations. In this gesture we can see that strange process of „becoming another self, becoming the animal“ (according to Deleuze and Guattari). In his late drawings the melting of forms is being materialized, as they were substituted by the abstract lines. As if the melting of the form itself was becoming the content. The expression eventuated into the rhytmical lines and clouds loaded with physical and mental energy. This will to escape the form tells us that it was probably better for the author to „want nothing than not to want anything“. The aesthetics of melting has finally enabled the author to vanish himself. The drawings therefore became the message of his disappearance.

The MODUS OPERANDI installation became as a whole a very appealing memento.